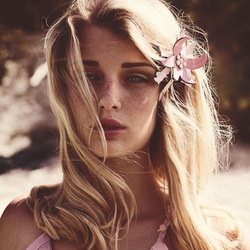 Extracurriculars: Prom Committee (because she has to), School Band

Piercings or tattoos: a piercing on her upper lip, a half moon on her right shoulder

selling drugs to the jocks and preppy girls

give her father a headache

taking things that aren't hers just for the sake of it

shopping and getting free drinks

Character dislikes: the mean girls and the cheerleaders

being the principal's daughter

not being invited to the parties

eating in the bathroom

Favourite music: depends on her mood, but probably pastel pop and instrumentals

Romantic Relationship to other characters: tbd

Overall character history: Jenna is the only daughter of Edison Paul, Watfield Academy's principal. She runs a personal business within the school - selling molly and other pills to those who can afford them by hiding them inside jewelry boxes and taping them under people's seats so her identity remains anonymous. She's a bit bitter since it has always been complicated for her to make friends and people leaves her out because of her shyness and because she's the principal's daughter and people fear she might be a snitch. She started selling to get from under her dad's strict rules and make her own money after some senior approached her with the idea when she was a sophomore. She's rather good at school but has never felt like she belongs, and therefore despises it. Deep down she's only tired of being alone, and the lack of a maternal figure has also affected her, but could be pretty loyal and caring if anyone dared to give her a chance and get to know her.

˜”* watfield academy lockers {kohl saunders & jenna paul} - kohl has a mess accident when his belongings fall out of his locker, including his stash. jenna witnesses part of it and they have a somewhat flirty conversation.

˜”* the bleachers {wyatt brody & jenna paul} - jenna is scared and worried after her stash was robbed and she has to pay for all of it or face the consequences. wyatt attempts to make amends with her.