Hair colour: Brunette
Hair style: Long straight till the waist
Eye colour: Green
Clothing style: Chic, Preppy, Flamboyant
Piercings or tattoos: Piercing on her belly button, two on her right ear, three on the left. Tattoos one the side of her breast, writing “win”, one on her wrist her star sign

Overall character history:
* Daughter to politicians
* Very competitive likes winning
* Wants to be a fashion designer
* Wants to win the Ivy League scholarship just because she can
* Lots of attitude
* Is yet to come out as a lesbian, scared that she’ll disappoint her parents
* Has a crush on Allison Deveraux but disregards it as rivalry/ hatred for her
* Cheated on Allison to get back at her with her boyfriend
* Pays for sex to fulfill her needs
* Pays for anything she wants, even exam paper information
* Is very proud about her money and doesn’t think twice throwing it on peoples faces
* Stays away from her sister to not get her reputation ruined due to her nerdy image
* Drinks occasionally 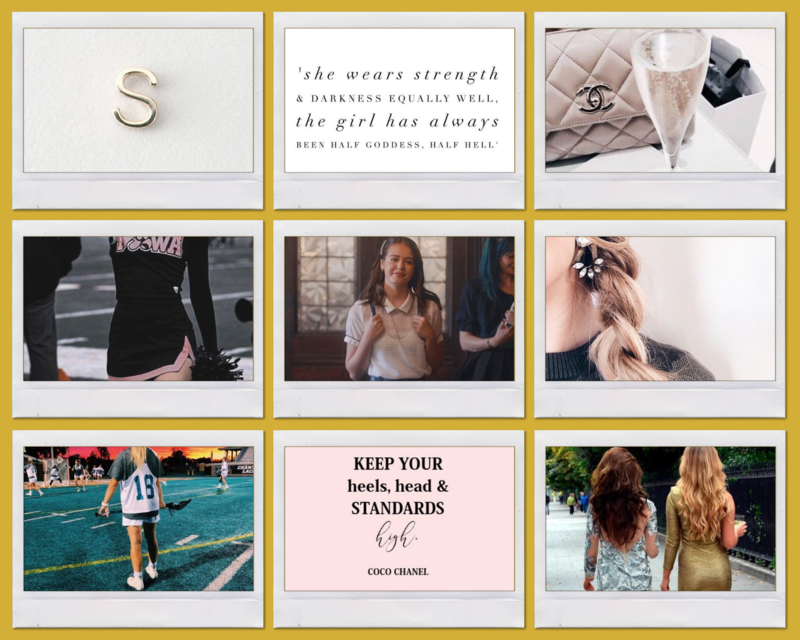 They say that families come in all shapes and sizes and that is definitely true for the Blackwell family. Had it not been for a cruel twist of fate that had seen her father being abandoned by his first wife then Josie never would have been born. As it was she was born into an incredibly happy family, albeit one that definitely didn't fit the status quo. Before she came along Josie's parents had already had a mismatched family consisting of her dad's two children from a previous relationship and her mom's niece and nephew who had become her wards after their parents died and the house was already quite full by the time Josie came along, especially since she didn't come into the world on her own.


Josephine Blackwell was born in France alongside her twin sister Catherine Blackwell and from the moment she entered the world she was loved. Even as a baby Josie was the quieter of the two, always happy to let Cathy take center stage before she was even old enough to realise it. To begin with, it didn't look like anything out of the ordinary was going on with either of the girls, they were normal, healthy and happy baby girls and they had two parents as well as four older siblings who absolutely doted on them and she often fell asleep nestled in the arms of one of her parents or her siblings. Things were perfect, more so than anyone would have thought, but as things often did with their family things were about to get a lot more complicated.


To find out if she was a Siphoner like her sister, Josie touched a Vampire and siphoned some of its power inside her, giving birth to the Darkness inside of her. Their siphoning was witnessed by the humans of their town, leading Claude and Gertrude to escape and take up residence at Ravenswood after learning of the magical school.

Out of the Blackwell twins, Josie has always been the calm to her sister’s storm. While Cathy likes to be the center of attention, Josie is much more reserved and is happy to keep her head down and stay quiet most of the time. She has never had trouble making friends as she is an easy going and helpful person and she enjoys being a part of the Ravenswood School and tries to assist with the welcoming team so that she can show prospective new students around. She has never been one to back down from a challenge and doesn’t even let the fact that she is a siphoner get her down. Away from the school she is at a disadvantage given that she can’t generate her own magic but she wears a pendant at all times that contains magic she can use if she needs to. When it comes to her family and friends, there isn’t anything that Josie won’t do to protect them even if that means putting herself in harm’s way. She loves her parents and all five of her siblings dearly and she has such a special bond with each of them that she knows that she would be lost without them. Another thing she originally struggled with was her sexuality as she found herself being attracted to a few different people.

- Is a siphoner like her sister (can siphon magic from any magical being)
- French National
- Moved to Ravenswood at the age of 10 after being told about the school
- Always overshadowed by her sister
- Struggles with her darker side
- Is the stronger of the two sisters
- Weaknesses: Huntress blood, certain herbs, mystical objects
- Struggles with her sexuality