7 replies to this topic

Piercings or tattoos: A half moon and three stars on her left shoulder

Character Traits: Smart, talkative, outgoing, laid-back, happy-go-lucky, can be a bad influence because of her selfishness

Character dislikes: Waiting, being on her own, robots make her uncomfortable

Favourite music: She probably knows all the lyrics to every popular song, no matter the genre, though definitely pop music.

Favourite food: Sushi, but has a secret love for ribs and boneless. Can stuff her face with cheese pizza every once in a while

Overall character history: Phoebe is the typical preppy girl who is involved in academics and sports as well. She comes from a wealthy family and is used to getting everything she wants. She has a certain innocence to her while she also exploits her feminine traits. She's very traditional when it comes to dating, though that hadn't stopped her from kissing a boy or two during party games. She makes friends easily and has them all around the different cliques, though she's closer to the ones in the groups she moves in. She's pretty good friends with Allison Deveraux, a senior girl she could be a bit of a bad influence to. She could be a bit selfish and times but tries to make up for her mistakes in grand displays of regret. There's a bit of a mean side to her, especially when she feels threatened in a way, or doesn't get what she wants when she wants it.

Her family is more on the conservative side, and her mother was famous when young as she participated in several pageants, winning most of them. Her dad is a huge entrepeneur who is also pretty family-oriented, making both Levan girls the house's princesses while their mom is the queen. They also are one of the many scholarship sponsors at Watfield Academy.

3. Cafeteria, the jocks and the mean girls have lunch

5. Somewhere close to the Ripleys, Phoebe asks Augie to pick her up after her argument with Chad 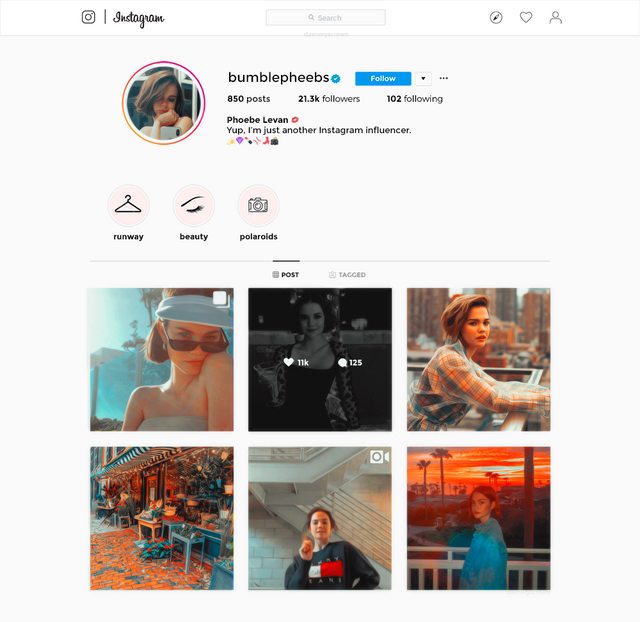 10 Things I Hate About You, but it's Santi and Angela as Auggie & Phoebe Hair style: Waist-long, open hair most of the times or a high ponytail

Eye colour: Red, wears amber-coloured lenses when outside the school

Clothing style: Goth, loads of corsettes (thank Lilith they made a comeback!) and tight clothes. She wears a lot of black but also adds colorful garments as she's grown to actually enjoy how they look on her.

Piercings or tattoos: Tried more than a dozen times but they always heal. However, she likes the pain and gets tattoos several times, to at least sport the new vanishing art for a couple days or an entire week.

Character dislikes: Werewolves and wooden stakes, because those two are the only things on earth that could kill her; garlic

Favourite music: She listens to everything, but hard rock, metal, other sub-genres and instrumental music are her favorite

Favourite food: Human blood, body fluids, fear. She also enjoys a good slice of pizza every once in a while.

Other family members: Didn't meet them

Mircalla was turned when she was 16 years old. She was born in Moravia in 1753, when the region was reigned by the the Habsburgs as part of the Crown of Bohemia. Her mother was pregnant with with her second child when Mircalla became an immortal. Her father was a religious fanatic, and had gotten worse after the Great Vampire Pandemic, when there was a massive paranoia all along the Austro-Hungarian Empire following an outbreak of epidemics. While he had taken care of of her as a child, the moment Micarlla became a teenager she practically became a hostage in her own home. People disappeared pretty often, and keeping her locked was a way to keep the evil spirits away and prevent her from provoke men. She had found a way to escape at night and joined late night festivities that included gettogethers and dances. A religious leader that was part of the church they attended spotted her there and didn't lose time letting Silas know. By the time she had gotten back home, the man had already arrived and her father was shouting her name. She tried to spare herself by telling a white lie, but the leader assured that any lie condemned the soul, and that she wouldn't be able to find God and rest in peace one she left this world unless she accepted him in her heart. After being abused by her father, Micarlla was forced to join the church leader every day to 'save her soul', but this took an awful turn in which she had to run for her life and well-being. The depraved man chased after her for several miles until she found herself trapped. In order to escape, she jumped from a cliff in hopes to land in the water and swim, probably escape from such a conservative and abusing home, preferring to risk her life than to spend another second with this man. Unfortunately, it was a fatal accident, with the leader cursing her soul by saying she was impure and that self-slaughter was one of the biggest sins there were, which meant she'd never rest in peace and would be trapped in this world for eternity.

Three days after, Micarlla woke up as a vampire, a succubus, which was the felony she had been judged by — promiscuity. The sweet girl had had a drastic change, and so decided to change her name to Karmie, short from her name mixed with the word 'karma'. She hunted the church leader and her father, breaking her mother free from a lifetime of mistreatment, and had to abandon Moravia for her mother and the baby's sake. She'd write her pretty often, signing the letters as Petra Carmillović since everyone in town believed she had died. But she never forgive the woman for participating in her father's abuses and ideas, nor the fact that it sometimes felt like she didn't love her as she should. With the hysteria and continent-wide persecussion, Karmie was never able to go back home, and became a gypsy during the first few decades of her new life, hunting and seducing men and women alike just for the satisfaction and the power it made her feel, all this tied up back to her family. Karmie managed to blend in and start over several times, whenever time called for it so no one would suspect anything.

She's attended several schools around the world, and excels in her academics due to the many years of learning the same over and over again, hence the new topics and discoveries are a bit more difficult for her. She hates Geography since she always has to start over when learning the countries as it's constantly changing, and finds the origins of the Earth to be repetitive.

Karmie Through The Years